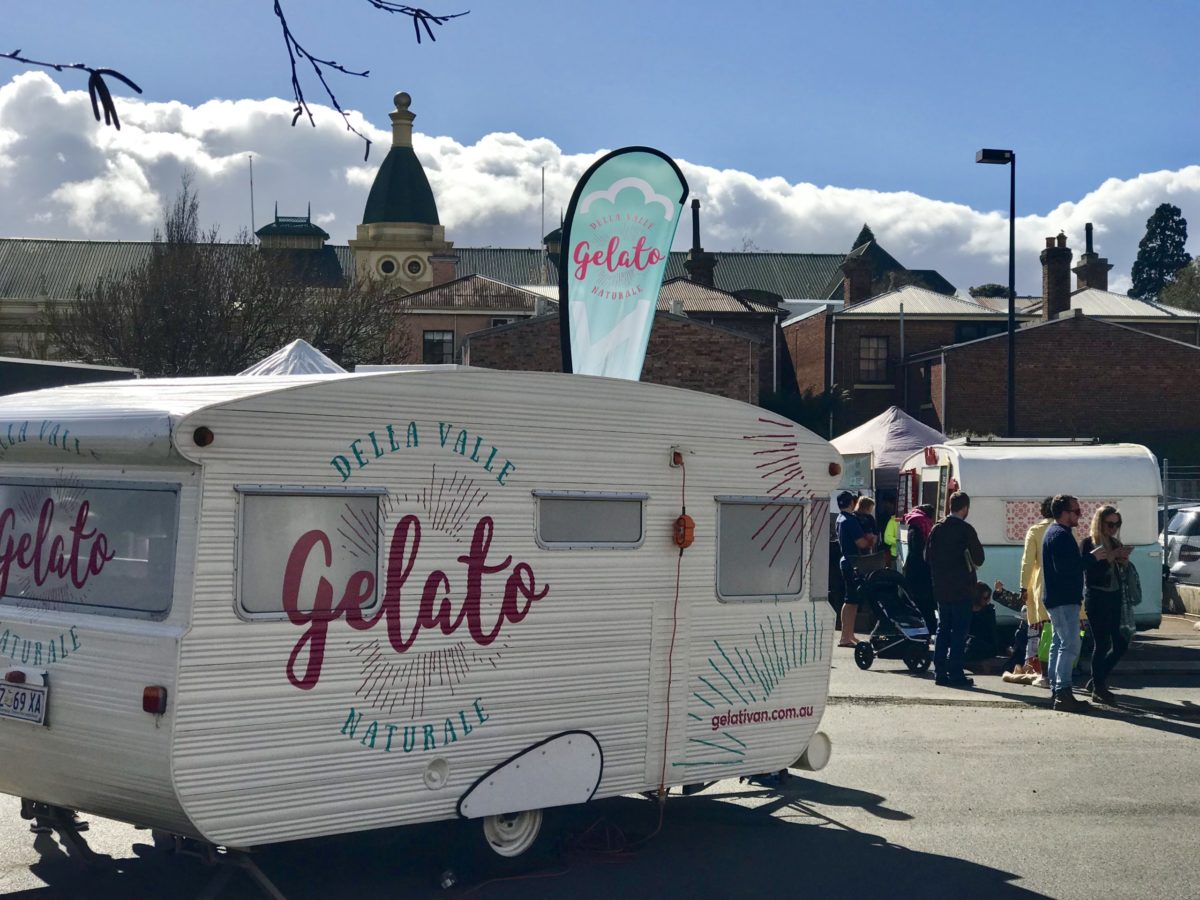 Inspired by the bounty of the local Tamar Valley, a heritage that stretches back to an ancestral valley in Italy, a happenstance book on gelato, a dream and a chance to attend gelato school have all coalesced into the taste sensation that is Della Valle Gelato.

Ask Deb and Dale to tell you their story as your tongue works its way around flavours that are in abundance around you at the market and your brain takes a few minutes longer to catch up with the innovative taste combinations of their gelato. Look out for coffee, local hazelnuts, ripples of raspberry or citrus sorbetto with blood orange or lime to get your taste buds abuzz.

A chance discovery of a novel book on ice cream by two San Francisco chefs several years ago in the Hobart State Cinema bookshop planted the seed for the gelato business.

The dream took a step forward in 2015 when Deb accompanied Dale on a work trip to Italy and was able to enrol at the Carpigiani Gelato University in Bologna.

Upon returning to Launceston, Deb resigned from her job at the Launceston General Hospital and they started their long journey to make artisanal gelato and “have as much fun as possible attending fairs, festivals and markets and taking gelato to the people rather than having a shop front”. But first the long and expensive process of ordering equipment from Italy, finding suitable premises and setting up a small business was undertaken.

Their name Della Valle is inspired by Dale’s great grandfather, Natale Antonio Della Valle (pronounced Dell-ah Var-Lee). He was born in the small mountain village of Sondalo in the northern Italian state of Lombardia in 1866. He emigrated to New South Wales in 1886 making his way west in the Coolgardie gold rush of 1894. Settling in the town of Malcolm, he met and married, of all people, the daughter of a Tasmanian convict, John King!

Della Valle literally means ‘of the Valley’, is a fitting name for their gelato business, celebrating their Italian heritage as well as their home in the Tamar Valley. “The natural beauty and bounty of Tasmania provides the raw materials and an endless inspiration for making the traditional and innovative flavours of our artisanal gelato. We are very happy to be able to source much of our local produce at the market each week. When something is bountiful at the Harvest Market one week we try to incorporate that into a gelato or sorbetto the following week.”